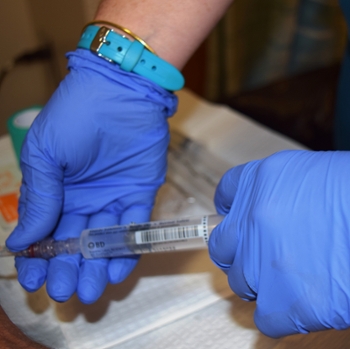 At a time when cancer drug prices are rising rapidly, an innovative new study provides the framework for establishing value based pricing for all new oncology drugs entering the marketplace. Using a highly sophisticated economic model, researchers from Winship Cancer Institute of Emory University and Georgia Institute of Technology used an example of a new lung cancer drug. The study findings are published today in JAMA Oncology.

Researchers focused their investigation on a drug called necitumumab, which is awaiting approval from the U.S. Food and Drug Administration. Previous studies have shown that the drug extends the life in patients with metastatic squamous lung cancer by about seven weeks.

The researchers used their economic model to factor medication and administration costs with life expectancy, frequency and management of adverse effects, and quality of life. The results demonstrated that the value-based price for necitumumab ranges between $563 and $1,309 per three-week cycle, which is significantly lower than most cancer drugs that have entered the marketplace recently.

"Cancer drug prices have been skyrocketing in recent years, and these prices are not linked to the benefit that the drugs provide. Most new cancer drugs cost in excess of $10,000 per month," says lead study author Daniel A. Goldstein, MD, who recently completed his fellowship in the Department of Hematology and Medical Oncology at Winship. "These rising prices are unsustainable to the system. Potentially life-saving drugs should carry a high price tag, but drugs such as necitumumab that extend life expectancy only by a matter of weeks should cost significantly less."

According to the study authors, "the current system of paying for cancer drugs in the United States provides little incentive for manufacturers and physicians to consider value when pricing and using drugs." Although the study determined pricing for one specific drug, the analysis conducted establishes a model by which other cancer drugs can similarly be assessed in the future to develop value-based prices. The study concludes: "There is currently a crucial step in the drug development and approval process that is missing – an evaluation of cost and value."