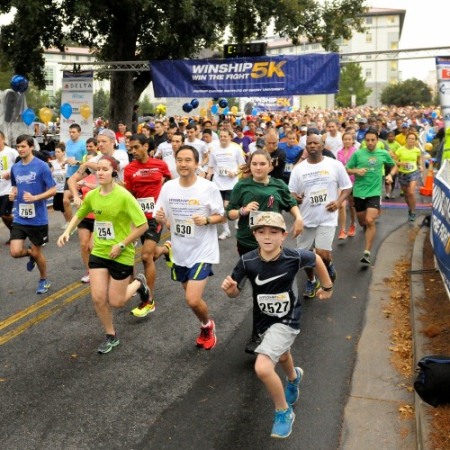 An estimated 3,000 runners and walkers will join John Schuerholz, legendary president of the Atlanta Braves, at the starting line of the Winship Cancer Institute of Emory University (Winship) Win the Fight 5K Run/Walk on Saturday, October 3. Schuerholz, who was successfully treated for prostate cancer in 2014 at Winship at Emory Saint Joseph's Hospital, will serve as grand marshal of the event. WSB-TV reporter Mark Winne will be the emcee for the fourth year in a row.

For the first time, Cox Enterprises has signed on as a presenting sponsor. Other major corporate sponsors include Peach State Freightliner, Delta Air Lines and Arrow Exterminators.

The Winship 5K is a Peachtree Road Race qualifier and one of Atlanta’s most popular running events. Participants who cannot join the event on race day have an option to participate virtually as a "Sleep-in Warrior" and can donate to the cause and be recognized.

The Winship 5K is unique because it allows participants to direct their tax-deductible donations to benefit cancer research in one of 18 different areas including bone marrow transplantation, breast cancer, melanoma, myeloma and sarcoma.