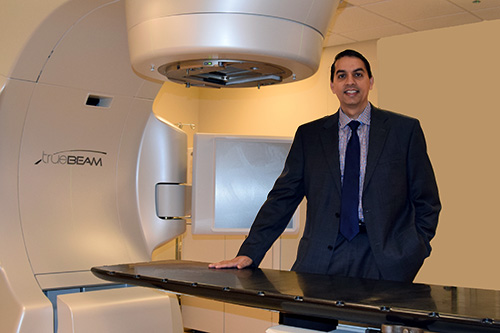 Winship Cancer Institute physician-scientist Mohammad K. Khan MD, PhD is the principal investigator of a new clinical trial that will study the effects of radiation therapy and immunotherapy in combination to treat melanoma and non-small cell lung cancer (NSCLC) patients with brain metastases. The study will use stereotactic radiosurgery and the anti-PD1 immunotherapy drug pembrolizumab.

The trial, which is supported by Merck, will look at whether radiation abscopal effects can be enhanced when combined with pembrolizumab to improve outcomes in patients with cancer that has spread to the brain. Stereotactic radiosurgery (SRS) in combination with pembrolizumab will be used to see if a patient’s own immune system can be stimulated to more effectively fight cancer cells that have spread to the brain, as well as cancer cells that may also be outside of the brain. (View study description.)