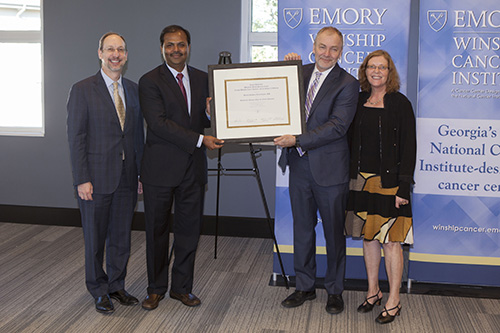 Suresh S. Ramalingam, MD, deputy director of Winship Cancer Institute of Emory University (Winship) and assistant dean for cancer research in the Emory School of Medicine, was honored with the Roberto C. Goizueta Distinguished Chair for Cancer Research. The endowment was established to support a key leader in Winship's lung cancer program. The position was previously held by Fadlo R. Khuri, MD.

Ramalingam, a professor in the Department of Hematology and Medical Oncology, is an internationally recognized lung cancer physician-investigator. He serves as Winship's director of medical oncology and its Lung Cancer Working Group, and he currently co-leads Winship's Discovery and Developmental Therapeutics Research Program.

Ramalingam chairs the Thoracic Malignancies Committee and serves as deputy chair for the Therapeutics Program within ECOG-ACRIN, a National Cancer Institute-supported national clinical trials network group. His research focuses on development of novel anti-cancer agents and ways to individualize therapies for patients with small cell and non-small cell lung cancer.

Ramalingam, who is board certified in medical oncology and internal medicine, has authored over 200 scientific publications and is the section editor for "Chest Diseases" for the journal Cancer. He is on the editorial boards of the Journal of Clinical Oncology, Annals of Oncology, and Clinical Lung Cancer.

He joined the Winship faculty in 2007 and is the recipient of several awards including the James Eckman Award for Excellence in Teaching at Emory, ECOG-ACRIN Young Investigator Award, and the NCI Cancer Clinical Investigator Team Leadership Award. He was named a Georgia Cancer Coalition Distinguished Cancer Scholar in 2008.

Roberto C. Goizueta was chairman and chief executive officer of The Coca-Cola Company from 1981 until 1997, when he died from lung cancer. His vision was for creating sustainable change and lasting impact for our community and beyond.