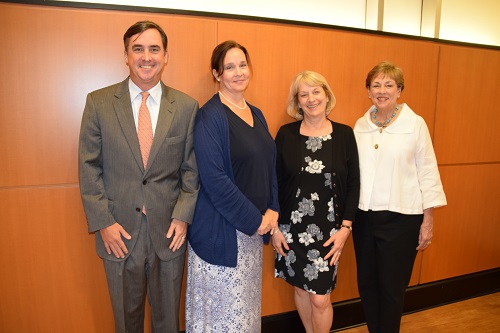 A Winship Cancer Institute clinical research nurse and a devoted volunteer are the 2016 recipients of the Robert L. "Bobby" Rearden Spirit of Winship Award. Cathy Sharp, RN, who is the team leader for the multiple myeloma research group, and Michael Thomas, who serves as one of the main volunteers on the plaza level concierge desk, were chosen for the award because they exemplify Winship’s culture of caring for the whole patient during and after his or her cancer journey.

"The Spirit of Winship Award recognizes a faculty or staff member and a volunteer who demonstrate exemplary service, teamwork, and a commitment to public good," says Walter J. Curran, Jr., MD, executive director of Winship. "We are excited to honor Cathy and Mike because they truly represent the spirit, enthusiasm and generosity that Bobby Rearden showed in his support of Winship."

Sharp joined Winship’s multiple myeloma team in 2011. She was promoted to team lead two years later and oversees a group of clinical research nurses and coordinators who promote multiple myeloma research at Winship. Sharp says "this is the hardest job I've ever had, but it’s the also the most rewarding."

Thomas was inspired to give back following the death of his wife from colon cancer. He started volunteering last year and has dedicated over 500 hours of service to Winship. In addition to greeting patients when they walk in the door, he serves on the Volunteer Advisory Board and assists the Volunteer Services Program with continued development. Thomas says "it moves my heart everyday to be able to greet and assist the patients and families as they arrive."

A monetary award will be made in the name of the award recipients to an area of their choosing within Winship.

Rearden passed away last year while undergoing treatment for a recurrence of leukemia. He was an Atlanta businessman and a member of the bid team that brought the Centennial Olympic Games to Atlanta 20 years ago this month. He served as a patient advocate on Winship's External Advisory Board which is comprised of national leaders at other National Cancer Institute designated cancer centers. He also served as honorary chair of Friends of Winship and was a founding member of Winship's Community Advisory Board.