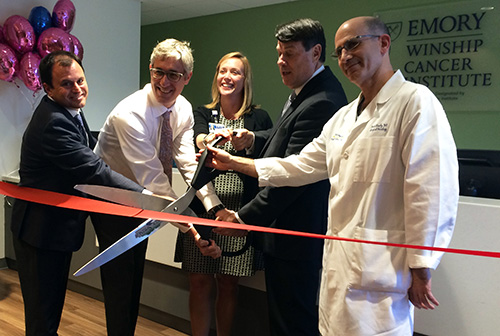 As a part of Georgia's first and only National Cancer Institute (NCI)-designated cancer center, Winship at Emory Saint Joseph's treats nearly 400 patients daily. The expansion was designed to enhance the patient care experience while also offering the most advanced technology available for cancer treatment.

"Our community was in need of additional cancer care, and our goal was to enhance and expand our patient care at Winship," says Heather Dexter, CEO of Emory Saint Joseph's about the facility. "Throughout this multi-phase project during the past year, we continued to provide exceptional care for our patients in radiation oncology, surgical oncology and medical oncology. Patient-centered care is our main focus, and we are pleased to offer so many treatment options and new resources at Winship at Emory Saint Joseph's."

In addition to the physical transformation of new treatment areas, clinical space, and technology, Winship at Emory Saint Joseph's patients also have the benefit of receiving cutting edge treatment in their own community with the resources of an NCI-designated cancer center.

The community oncology program, led by director Stephen Szabo, MD, treats patients with many types of cancer. This comprehensive care also includes valuable patient resources such as a dietician, genetic counselor, and social workers on staff.

"We're serving as an example to the whole nation of how healthcare delivery can be aligned with an NCI-designated cancer center. What I want the clinicians, nurses, therapists, dosimetrists, and other staff to feel is that whether they’re working at Emory Saint Joseph's, Emory Midtown, Emory Johns Creek, or Clifton Road, they're really a part of the same team," says Curran.

"We're here to support one another in giving the very best care, enlightened by the research that’s being done today, and tomorrow."