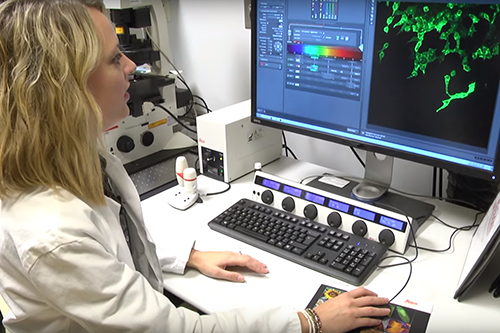 When cancer cells split off from a tumor to seed deadly metastases, they are thought to travel as clusters or packs, a phenomenon known as collective invasion. The members of an invasive pack are not all alike, scientists at Winship Cancer Institute of Emory University have learned.

Lung cancer cells making up an invasive pack have specialized roles as leaders and followers, which depend on each other for mobility and survival, the scientists report in Nature Communications.

The differences between leaders and followers -- and their interdependence -- could be keys for future treatments aimed at impairing or preventing cancer metastasis, says senior author Adam Marcus, PhD, associate professor of hematology and medical oncology at Winship Cancer Institute and Emory University School of Medicine.

Marcus and former graduate student Jessica Konen, PhD began by observing how a mass of lung cancer cells behaves when embedded in a 3-D protein gel. The cells generally stick together, but occasionally, a few cells extend out of the mass like tentacles, with the leader cell at the tip.

"We saw that when the leader cell became detached or died unexpectedly, the followers could no longer move," says Konen, now a postdoctoral fellow at MD Anderson. "In one particular movie, we saw a leader cell come out away from the rest of the cells, and then seem to realize that nobody was following him. He actually did a 180, and went back to grab cells to bring with him."

The SaGA of separating leaders and followers

To study what makes leader and follower cells different from each other, Marcus and Konen developed a technique for marking the cultured cells with a laser, thus changing them from fluorescent green to red, and then isolating red cells. They call this technique SaGA, for spatiotemporal genomic and cellular analysis.

Leaders show several differences from follower cells in the patterns of genes that are turned on or off. For example, leader cells secrete more VEGF (vascular endothelial growth factor) than followers do.

VEGF is important for the growth of blood vessels and is the target of anti-cancer drugs such as bevacizumab, known commercially as Avastin. By themselves, leader cells do not need VEGF for invasive behavior, but VEGF appears to be important for pack formation because it is a mobility factor leaders provide followers.

In contrast, what followers provide leaders is the ability to grow and survive. When growing separately from followers, leaders increase their numbers at a slower rate, have erratic cell cycles and have more "blebs", which are bulges of the cell membrane. Contact with followers rescues these problems, the researchers found.

Other molecular differences between leaders and followers include traction-generating FAK (focal adhesion kinase) activity in leader cells and growth-promoting Notch signaling in followers – both potential avenues for disrupting the symbiotic relationship between leaders and followers. A related paper on the potential use of FAK inhibitors against lung cancer was recently published in JCI Insight by Marcus and his colleagues.

The Nature Communications paper covers lung cancer cells; a similar phenomenon of collective invasion led by distinctive cells has been observed in breast cancer, but different genes and biochemical pathways appear to be important in each system.

"I think what's needed for collective invasion will depend on the environmental stresses the cancer cells face, and it may shift with treatment," Marcus says.

As described, the SaGA technique depends upon first having a photo-convertible fluorescent green protein called Dendra in the cells. Marcus' lab is now testing whether similar approaches could work when studying tumor organoids derived from cancer patients, either using Dendra or with photo-convertible dyes.

Marcus stresses that SaGA can be applied to additional cell types or environments, or other types of cancer cell behavior such as drug resistance. His lab continues to study the genetic and/or epigenetic basis for the differences between leader and follower cells.

A video explaining SaGA won first prize in a contest organized by the Association of American Medical Colleges in 2015. See video.