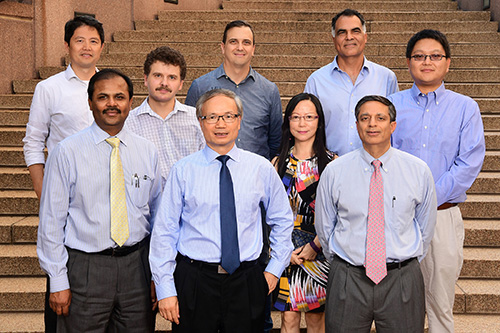 A research team led by Haian Fu, PhD, within the cancer genomics center at Emory University and Winship Cancer Institute, has been selected by the National Cancer Institute (NCI) to participate in an elite national network focused on discovery of new cancer targets and precision cancer therapies.

The Emory Molecular Interaction Center for Functional Genomics (MicFG) will be funded by a $4.52 million grant over five years. It is one of 12 centers designated for the NCI's Cancer Target Discovery and Development (CTD2) Network. Emory was first chosen by the NCI for its CTD2 Network in 2012. The CTD2 initiative was established to advance the knowledge of cancer etiology and mechanisms, and to potentially accelerate the development of therapeutic targets for precision oncology using computational and functional genomic approaches.

"Increasing efforts in large scale genomic studies across tumor types have revealed both frequent and rare mutations that are directly associated with cancer, offering new opportunities to target oncogenic genes at a much higher resolution today. Our new designation will allow us to leverage these new developments and sharply focus on cancer-driven mutations to develop possible therapies for those once considered 'undruggables.'"

Although large amounts of data have been generated for genomic alterations in cancer, scientists face mounting challenges in translating these data into precision drug therapies. The Emory team will use powerful high-throughput screening technology, housed in the Emory Chemical Biology Discovery Center, to generate cancer-specific protein-protein interaction data. The bioinformatics team will analyze and integrate these data with genomic and clinical information for target prioritization and for public data sharing. The physician team will help provide disease insights to link genomic alterations with patient populations of specific tumor types for personalized medicine.

"The identification of tumor-mutation mediated protein-protein interactions from this study may lead to the discovery of an entirely novel class of anticancer drugs for our patients", says Ramalingam, co-leader of MicFG and deputy director of the Winship Cancer Institute.

As an example of their discoveries in the first MicFG cycle, Fu and his colleagues mapped the vast spider web of interactions between proteins in lung cancer cells, leading to new information about specific links between tumor suppressor genes, protein networks, and sensitivity to an FDA-approved drug now being tested in a clinical trial for non-small cell lung cancers. These PPI network data have been deposited in the NCI-hosted Data Portal for public sharing.