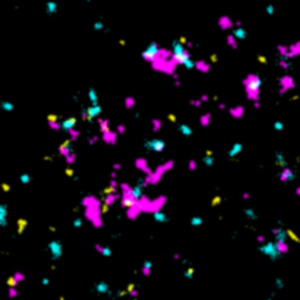 The findings were published this week in Cell Reports (open access).

SAMHD1 was known for its ability to chop up the building blocks of DNA, and had come to the attention of virologists because it limits the ability of retroviruses such as HIV to infect some cell types. The first author of the paper, postdoc Waaqo Daddacha, PhD, previously studied SAMHD1 with virologist Baek Kim, PhD, professor of pediatrics.

Cancer researchers had already sought to harness a retroviral protein called Vpx, which viruses evolved to disable SAMHD1. Acute myeloid leukemia cells use SAMHD1 to get rid of the drug cytarabine, so Vpx can sensitize AML to that drug. The Cell Reports paper shows that virus-like particles carrying Vpx could be deployed against other types of cancer, in combination with agents that induce DNA double-strand breaks.

In addition, Daddacha, Yu and their colleagues discovered that SAMHD1 is involved in processing the damaged ends of chromosomes, independently of its chopping function. Other drugs could potentially target that processing role. The scientists showed that SAMHD1 appears at sites of DNA damage in cells and interacts with other DNA repair proteins.

Mutations in the gene encoding SAMHD1 have been observed in some forms of leukemia and colorectal cancer. One such mutation in SAMHD1 disrupted the interaction with the other repair factors. SAMHD1 mutations, along with mutations in several other genes, also cause Aicardi-Goutieres syndrome, an autoimmune disorder.

Yu is associate professor of radiation oncology at Winship Cancer Institute and Emory University School of Medicine. Co-author Kim is director of the Center for Drug Discovery, part of the Emory-Children's-Georgia Tech Research Alliance.