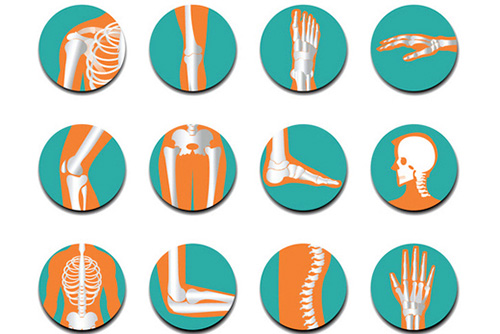 Chondroitin sulfate, a structural component of cartilage, is often recommended for the treatment of osteoarthritis. In cell culture and mouse models, it accelerates the growth of melanoma cells with mutations in the B-raf gene.

Chondroitin sulfate, a dietary supplement taken to strengthen joints, can speed the growth of a type of melanoma, according to experiments conducted in cell culture and mouse models.

The results were published Thursday, March 15 in Molecular Cell with invited external commentary.

One particular mutation in the B-raf gene (V600E) can be found in about half of melanomas. Jing Chen, PhD and colleagues found that chondroitin sulfate can boost growth by melanoma cells carrying the V600E mutation, but not other melanoma cells.

Chondroitin sulfate, given to mice with implanted V600E tumors, has a similar effect at levels comparable to those seen in humans when it is used as a dietary supplement. V600E tumors in mice fed with chondroitin sulfate also showed resistance to vemurafenib, a small molecule B-raf inhibitor currently used to treat V600E-positive melanoma patients.

While unconfirmed in human epidemiological studies, the findings are a warning to oncologists, and people at an elevated risk of melanoma, regarding potential risks of dietary supplements. Chondroitin sulfate, a structural component of cartilage, is often recommended for the treatment of osteoarthritis, in combination with other compounds such as glucosamine.

It is possible that someone with precancerous lesions containing the V600E mutation, who takes chondroitin sulfate, might accelerate the growth of those cells, or that V600E positive cancer patients taking chondroitin sulfate might have a higher risk of relapse, says Chen, professor of hematology and medical oncology at Winship Cancer Institute of Emory University.

"We want to be cautious about these results, and they should be followed up," he says. "There is not a lot of hard data on dietary supplement use. We found that we had to add a line to the forms melanoma patients fill out about their histories, since we weren't asking before."

He adds that a large study from the state of Washington showed no link between chondroitin sulfate and prostate or lung cancer risk, although genetic background, which might influence individual cancer risk, was not examined.

Working with Chen, instructor Ruiting Lin, PhD discovered the effect while evaluating various metabolic enzymes for whether they would be necessary to drive proliferation in mutated B-raf melanoma. Lin observed that the enzyme chondroitin sulfate glucuronyltransferase (CSGlcA-T, or CSG here for short) emerged in her screen. CSG is important for forming the chondroitin sulfate polymer, which is then secreted outside cells.

Chen says he and Lin were surprised to see CSG in their screen, saying: "We had to dig back in the literature to confirm that chondroitin sulfate does get taken up by cells." The finding that chondroitin sulfate can drive melanoma cell growth suggests a signaling role inside cells, which scientists are unfamiliar with. The researchers saw that only the polymeric form of chondroitin sulfate (not the digested form) would influence B-raf melanomas, which they call puzzling in the paper.

While their current paper also identifies CSG as an anticancer drug target, compounds that inhibit the enzyme are not readily available. Inhibitors would need to be tested for potential side effects such as joint pain or the deterioration of connective tissue.

It is possible that CSG may combine with other oncogenes besides B-raf V600E, Chen says. His lab previously showed that a high-fat, low-carbohydrate "ketogenic" diet can also accelerate the growth of V600E melanoma cells.

The research was supported by the National Cancer Institute (CA140515, CA183594, CA174786), Joel A. Katz Music Medicine Fund and the T.J. Martell Foundation. Lin is a fellow of The Leukemia & Lymphoma Society, and Chen is a Winship Cancer Institute 5K Scholar.