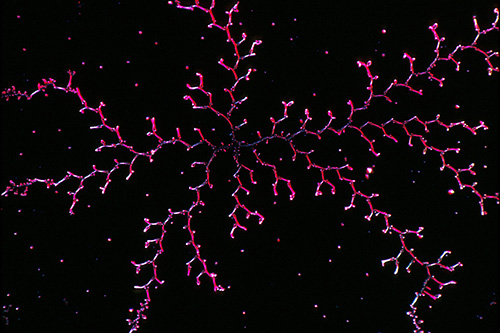 Despite being studied for decades, the chemotherapy drug cisplatin is revealing new aspects of how it works. Researchers at Winship Cancer Institute of Emory University have identified an enzyme responsible for making tumors and cancer cell lines resistant to cisplatin, along with an experimental drug that targets that enzyme.

The results were published on July 19 in Cancer Cell.

Cisplatin is a DNA-damaging agent used in standard treatment for lung, head and neck, ovarian, and testicular cancers. It has a simple structure, grabbing DNA with its metallic (platinum) arms to form crosslinks. It used to be known as "cis-flatten" because of its nausea-inducing side effects. The experimental drug, lestaurtinib, has already been tested in clinical studies in combination with other chemotherapy drugs, which means it could easily go into trials against tumors displaying cisplatin resistance.

Sumin Kang, PhD, and colleagues at Winship decided to look for enzymes whose activity was necessary for cancer cells to withstand cisplatin treatment. They chose kinases, enzymes that often control some aspect of cell growth and are have plenty of existing drugs targeting them. The researchers found that in combination with a sub-lethal amount of cisplatin, "knocking down" the activity of the kinase MAST1 kills a cell. But how does that combination work?

"We tested every type of drug resistance mechanism," says Kang, assistant professor of hematology and medical oncology at Emory University School of Medicine and a Robbins Scholar pilot grant recipient at Winship. "It seems to be 'post target.' That means it's not related to the cells getting rid of the drug faster. And it doesn't work on other agents that damage DNA, so it's not related to enhanced repair."

Instead, MAST1 seems to substitute for the activation of survival enzymes, cRaf and MEK1, which cisplatin interferes with. Cisplatin was known to damage DNA and to unleash reactive oxygen species within the cell, but the interaction between cisplatin and the survival enzymes had not been observed before, Kang says. Levels of MAST1 seem to account for cisplatin resistance, in a survey of cancer cell lines and primary human tumor samples.

The next step was to look for compounds that might inhibit MAST1. Kang's team found one in lestaurtinib, a kinase inhibitor that has already been in clinical trials for several types of cancer, such as acute myelogenous leukemia. It was a surprise because lestaurtinib was thought to inhibit a different type of kinase (tyrosine kinases) than MAST1.

"It opens up several possibilities, such as lestaurtinib, and other inhibitors," Kang says. "We think targeting MAST1 would be better than MEK1 because removing MAST1 doesn't have much toxic effect on cells by itself."

Potentially, such a combination could allow the dose of cisplatin to be reduced by several-fold, reducing side effects for patients, she adds.

The authors conclude: "MAST1-targeted therapy would be more beneficial to patients with advanced cancers or patients who received platinum-based therapy but recurred, in part, due to the induction of MAST1 during the treatment. Future pharmacokinetics and toxicity studies, and clinical trials, are warranted..."