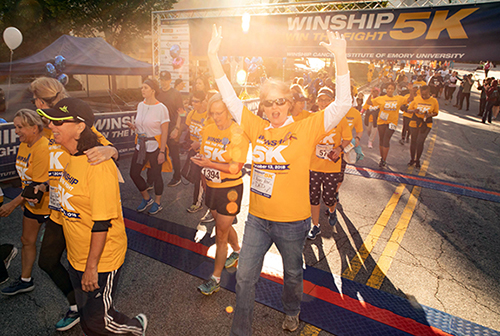 The 8th annual Winship 5K raised more than three quarters of a million dollars to benefit cancer research at Winship.

More than 3,200 runners and walkers participated in the event held on Saturday, October 13. The deadline to make contributions was November 30th. The final tally is $784,160 with more than 2,600 contributors.

Prior to the race, it was announced that Lawrence (Larry) Boise, PhD and Erwin Van Meir, PhD will be the inaugural recipients of 2018 Winship 5K Endowed Professorships, two new endowed awards funded through a portion of the proceeds from the Winship 5K. The awards will allow Boise and Van Meir to explore new areas of cancer research that may one day lead to new cures.

"We are thrilled to honor and support the outstanding cancer research conducted by both Larry and Erwin, two outstanding Winship faculty leaders who have each contributed to our knowledge about cancer at the most fundamental and important level," says Walter J. Curran, Jr., MD, executive director of Winship.

Plans are already in the works for the 9th Winship Win the Fight 5K to be held on Saturday, October 5, 2019 on the Emory University Campus.