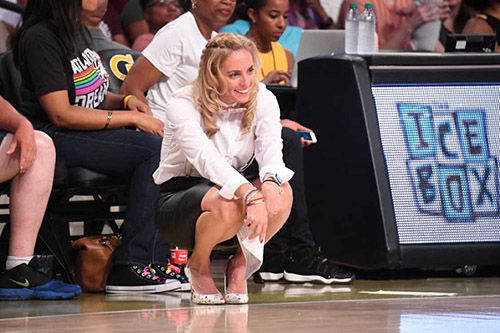 Nicki Collen, head coach of the WNBA's Atlanta Dream, will fire the starting gun at the Winship Win the Fight 5K Run/Walk this year on Saturday October 5th.

Registration for the 9th annual event is now open at winship5k.emory.edu. This year's run/walk will take place on the Emory University Quadrangle on Dowman Drive.

"I am honored to serve as Grand Marshal and join the more than 3,000 participants of the Winship 5K to raise funds for cancer research," says Collen. "Cancer touches every family, and Winship researchers are making great progress toward ending this disease as we know it."

Collen is in her second season leading the Atlanta Dream. She was named WNBA Coach of the Year in 2018. Last year, the team set a franchise record with 23 wins as Collen led the team to a WNBA semifinal round appearance.

"As the team’s head coach, Nicki Collen is a mentor and a role model for so many people in our community. We are grateful that she'll be inspiring the runners and walkers at the Winship 5K," says Walter J. Curran, Jr., MD, executive director of Winship.

Participants of the event will be able to direct their tax-deductible donations to benefit the Winship 5K Professorship as well as 17 other Winship cancer research funds. Anyone who is unable to attend in person has an option make an online donation and be recognized.