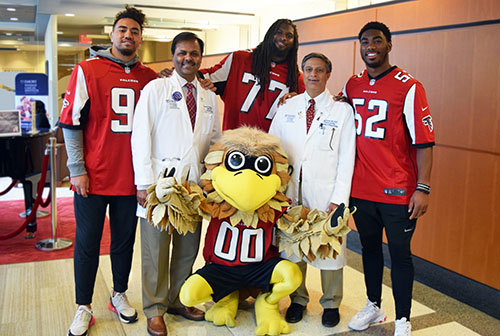 Winship Cancer Institute of Emory University (Winship) is very pleased to announce that the Atlanta Falcons are pledging an annual donation of $200,000 to Winship to support its cancer research programs.

"This generous gift from the Falcons will advance our cancer research efforts and will assist us in our mission of lessening the burden of cancer in Georgia," says Winship Executive Director Walter J. Curran, Jr., MD.  "We're extremely proud of our partnership with the Atlanta Falcons. They have raised awareness about cancer prevention and early detection through the Crucial Catch initiative. Now, through this pledge, the Falcons are providing crucial support for Winship’s ongoing efforts to tackle cancer here in our state."

The NFL (National Football League) has made cancer awareness a priority through the league's Crucial Catch initiative, which was launched in October and raised funds for research while also encouraging fans to schedule screenings. Falcons punter Matt Bosher was named Winship’s Crucial Catch spokesperson for this year’s initiative, which launched on the AtlantaFalcons.com/CrucialCatch website.

Winship sponsored the Falcons' Crucial Catch game on Oct. 20, when the team hosted the Los Angeles Rams. Winship cancer survivors and their families were recognized on the field for their triumph in their battle against cancer. Winship passed out Crucial Catch rally towels, commemorative lapel pins, and "I Celebrate" cards for fans to write in the name of someone they know who has been affected by cancer. Additionally, fans who made purchases at the team store at Mercedes Benz Stadium had the option of making a donation to help fund research at Winship to fight cancer.