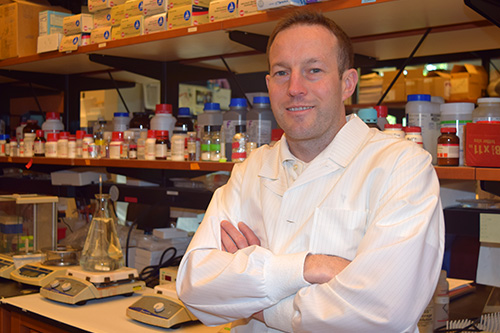 DNA rearrangements and extra chromosomes are very common in multiple myeloma cells, so genomics expert Ben Barwick, PhD, the first author of the paper, had to sort through a mountain of data.

The marker is a kind of rearrangement of chromosomes that is rarely tested for, but may indicate resistance to immunomodulatory drugs such as lenalidomide, which have become standard therapies in multiple myeloma.

The results were published in Nature Communications on April 23.

"This could be different than other markers that we currently use in myeloma, because it may influence which drugs physicians may choose in both initial treatment as well as maintenance therapy," says senior author Lawrence Boise, PhD, professor and vice chair for basic research in the Department of Hematology and Medical Oncology at Winship Cancer Institute and Emory University School of Medicine.

The findings emerged from the CoMMPass study, which made available whole-genome sequencing information from 795 newly diagnosed myeloma patients from several medical centers in North America and Europe. CoMMPass (Clinical Outcomes in Multiple Myeloma to Personal Assessment) is a resource sponsored by the Multiple Myeloma Research Foundation.

"This work is a perfect example of the benefits of broad access to CoMMPass data," says co-author Sagar Lonial, MD, FACP, an internationally recognized authority on multiple myeloma. "This kind of work would not have been possible without the collaborative team of scientists and clinicians we have that focuses on myeloma-specific research every day, and is helping to change how we view and treat this disease."

Lonial is chief medical officer of Winship Cancer Institute and chair of the department of Hematology and Medical Oncology. Boise is interim leader of Winship's Cancer Genetics and Epigenetics Research Program.

DNA rearrangements and extra chromosomes are very common in multiple myeloma cells, so genomics expert Ben Barwick, PhD, the first author of the paper, had to sort through a mountain of data.

Multiple myeloma is a cancer that comes from plasma cells, whose job is to pump out antibodies.

That means that the genes that encode the protein components of antibodies are very active in multiple myeloma cells. The kinds of DNA rearrangement that predicts poor outcomes are translocations involving one of those genes, the immunoglobulin lambda or IgL locus. The translocations join together IgL to another gene that drives rampant cell growth - often c-Myc, a well-known oncogene.

Various forms of IgL translocation were found in 10 percent of myeloma patients. Patients in this group were more than twice as likely to die within the first three years after diagnosis. IgL translocations are not usually tested for in the clinic, in comparison with other markers such as extra chromosomes.

"Most patients who have an IgL translocation are actually being diagnosed as having standard risk disease, so this study has helped explain why some patients who we think will do well end up relapsing and dying early," Boise says.

The researchers' analysis shows that patients with myelomas carrying IgL translocations derive no survival benefit from immunomodulatory drugs such as lenalidomide. This may be because the IgL gene's activity is resistant to the mechanism of action of those drugs, the authors propose. Recent research suggests that the lenalidomide family of drugs work by promoting the destruction of Ikaros proteins, which bind especially tightly to the IgL gene locus.

Additional research can begin to pin down what treatment strategies are more likely to be effective for multiple myelomas carrying IgL translocations. With the support of the Multiple Myeloma Research Foundation, the Winship team is developing a genomic test for the various types of IgL translocations and continuing to validate the findings.

Co-corresponding author Paula Vertino, PhD, was formerly at Winship and is now at the University of Rochester.

The research was supported by the National Cancer Institute (P30CA138292), an Answer Fund award by the Multiple Myeloma Research Foundation, and the American Cancer Society. Initial support for the project came from philanthropic funds connected with the Winship Win the Fight 5K.