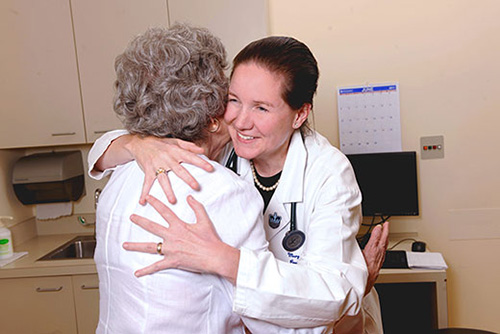 A professor of hematology and medical oncology, Mary Jo Lechowicz is beloved by medical students for her kindness, listening skills, passion for teaching and dedication to serving communities.

For close to two decades, Mary Jo Lechowicz has been shaping the next generation of medical practitioners and scholars — and she's been doing it with a soft touch. Beloved by medical students for her kind demeanor, "mad" listening skills, and passion for teaching, Lechowicz has played a significant role in molding the medical school curriculum and with that, the students who emerge from it.

A professor of hematology and medical oncology in the School of Medicine and the Margaret H. Rollins Chair in Cancer at the Winship Cancer Institute, Lechowicz and a number of colleagues some years ago introduced the Society System, in which incoming medical students are assigned to one of four societies in small groups of eight to 10. Lechowicz helped develop the standards and curriculum for these societies, which include processing sessions.

"In these sessions, we are trying to work on the wellness and resilience of the students as well as maintain the joy of medicine as they tackle the stresses and trauma they inevitably encounter," she says.

To ground her students in how to better serve their communities, Lechowicz helped develop a class around community learning and social medicine. Students in the class collaborate with MSN students at the U.S. Centers for Disease Control (CDC) over three semesters, researching and devising a plan, with their communities, to serve populations in need in the metro area, including struggling schools, elderly groups and refugee communities.

"The goal is to show students and other you can’t come into a community and tell them what they need," says Lechowicz. "Unless you walk the journey with that community, you won’t understand its subtleties."

In recognition of her leadership and commitment to education, Lechowicz is being honored as Emory's 2019 Exemplary Teacher of the Year. The award is supported by the United Methodist Church's General Board of Higher Education and Ministry.

"Emory's Exemplary Teacher of the Year Award recognizes an individual that reflects a true commitment to inclusion and has lived the values on which Emory was founded," says Vikas P. Sukhatme, dean of the Emory School of Medicine and chief academic officer of Emory Healthcare. "We would expect an award winner to hold to the highest standards in their professional and personal life, and go far beyond the expectations of simply an exceptional teacher. We would also hope that she has contributed scholarly work advancing the university's values, while being sensitive to the concerns of learners and colleagues."

"Quite simply, Dr. Lechowicz is this scholar and teacher," Sukhatme says. "Her work has been consistently impactful at Emory University, in Atlanta, and in the world."

Caring in the community

Her educational work also touches the Atlanta community. For over a decade, Lechowicz led the Summer Scholars Research Program at the Emory Winship Cancer Institute, a program meant to provide exposure to the high school students under direct supervision of a mentor. Some of these students have gone on to get their PhDs in cancer biology and a number have presented their work as lead authors at international meetings.

"Some of the greatest joy is working with these young students and opening their eyes to potential career paths," says Lechowicz.

Lechowicz not only teaches her students best practices, she models them as well. As a member of the Bone Marrow Transplant division, she cares for patients with virally related lymphomas, Castleman’s disease, and peripheral T-cell and cutaneous T cell lymphomas. Despite the substantial demands of her patient load, teaching responsibilities and research activities, she consistently finds the time to be an inspiring and reassuring presence for her patients.

Her passion for delivering quality and compassionate care is not lost on her students, who consistently say they want to emulate her in their professional life. In fact, her students have twice awarded her the "Doctor Who Could Take Care of Your Grandmother Award."