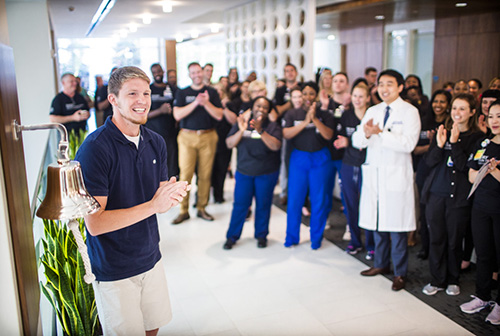 36-year-old glioma patient Stephen Brinkman from Columbus, Georgia prepares to ring the bell signifying the end of his treatment in front of staff and his friends and family at the Emory Proton Therapy Center.

Winship Cancer Institute of Emory University is celebrating the milestone of having completed treatment for more than 100 patients at the Emory Proton Therapy Center since it opened in December 2018. As the only proton center in the state of Georgia, the Emory Proton Therapy Center makes this powerful and precise radiation therapy possible for people throughout Georgia and the Southeast.

"Proton therapy is a type of radiation treatment that is helpful in the treatment of some tumors or cancers when it can allow us to better avoid or even eliminate radiation to areas of normal healthy tissues to reduce the side effects and risks of treatment. Since the opening of the Emory Proton Therapy Center, we have treated adults and children with a wide range of tumor types in all sites of the body," says Mark McDonald, MD, medical director of the Emory Proton Therapy Center.

Stephen Brinkman is one of those 100 initial patients treated at the center and a good example of why proton therapy is such a valuable tool in treating certain kinds of cancer. Brinkman, a 36-year-old Methodist pastor from Columbus, Georgia, has a low-grade glioma, a type of brain tumor that was surgically removed when it was first diagnosed in 2010. A follow-up MRI this year detected a recurrence of the tumor and Brinkman's surgeon referred him to Winship radiation oncologist Jim Zhong, MD.

"Mr. Brinkman's tumor is located in a section of the brain that is next to some very important areas -- the temporal lobe, the hippocampus, and the pituitary gland. Those areas are used for memory creation, for speech, and for making hormones,” says Zhong. "With X-ray radiation, those areas would get a significant dose of radiation, but using proton we're able to shape the beam to avoid treating those areas and avoid the side effects of treating those areas."

The physicians and staff at the Emory Proton Therapy Center are specially trained in using the latest proton treatment technologies, that match the proton beam to the different depths and contours of a tumor with less radiation exposure to healthy tissues. Over the past six months of operation, the center has steadily opened additional treatment rooms and expanded patient treatment capacity, with all five treatment rooms at the center becoming available this fall. McDonald says the center will be able to treat over 100 patients a day when the proton center is at full capacity.

"We are always mindful that the treatments we deliver today can have a lasting impact on our patients. This is an exciting time in all areas of oncology, with many new and advanced approaches – including proton therapy – to help our cancer survivors lead healthy lives with fewer side effects and risks of treatment," says McDonald. "Proton therapy has great potential for continued research and innovation that will advance the standard of cancer care for patients today and tomorrow."

Stephen Brinkman finished his six weeks of proton therapy on July 16th and right now is looking forward to a beach vacation with his wife and four children, but says he also keeps long-term goals in mind. "I look forward to raising our children, being a pastor, maybe one day doing weddings for my kids, all those things I hold tight to."