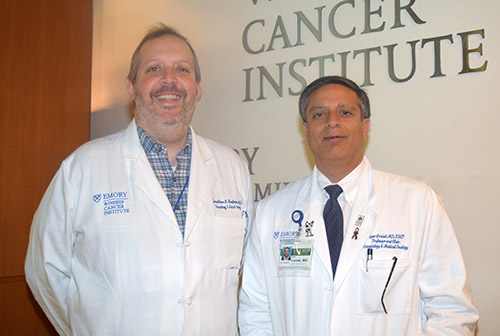 A clinical trial led by Winship Cancer Institute of Emory University through the ECOG/ACRIN group shows that lenalidomide significantly reduces the risk of smoldering multiple myeloma from progressing to multiple myeloma among patients at moderate or high risk. Lead author on the trial is Sagar Lonial, MD, chief medical officer of Winship and chair of the Emory Department of Hematology and Medical Oncology. The study, published in the Journal of Clinical Oncology, provides support for treating the premalignant condition.

"Identifying a precursor condition and preventing it from becoming cancer is a significant breakthrough that does support a change in clinical practice in the treatment of smoldering multiple myeloma," said Lonial.

The phase II/III randomized trial gained attention earlier this year when it was featured at the 2019 American Society of Clinical Oncology (ASCO) Annual Meeting. In both the phase II and phase III trials, lenalidomide led to improved outcomes for patents with moderate and high-risk smoldering myeloma, also known as asymptomatic myeloma. Key findings from the trials show a significant reduction in the risk of developing myeloma for patients randomized to early therapy.

"This is the largest randomized trial of smoldering multiple myeloma to date, and it uses lenalidomide, a much less toxic medicine than what has been used in the past for this disease," said Lonial. "For patients who are at the highest risk of progression, there was a 90% risk reduction for progression to myeloma compared with the observation arm. This is a significant benefit for these patients, and outside of clinical trial enrollment, now becomes a standard of care for these patients."

Lenalidomide is an analog of thalidomide, a drug developed decades ago as a sedative. Lenalidomide prevents the formation of blood vessels that can feed tumors such multiple myeloma, but it also carries the risk of possible serious side effects. The investigators are currently performing an analysis of people who stopped taking lenalidomide due to toxicity to see if even limited doses of the medicine delayed progression. Lonial noted that there are case reports of people who do not progress after just a few doses of the medicine, and that a new phase III trial exploring this hypothesis recently started enrolling patients.

This study received funding from the National Institutes of Health.