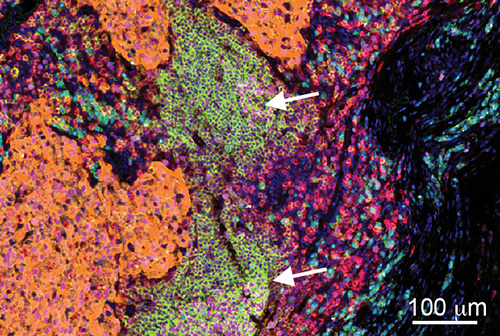 Immunotherapies have transformed the treatment of several types of cancer over the last decade. Yet they focus on reactivating one arm of the immune system: cytotoxic T cells, which sniff out and kill tumor cells.

In a new paper in Nature, scientists at Emory Vaccine Center and Winship Cancer Institute of Emory University (Winship) report on their detailed look at B cells' presence inside tumors. B cells represent the other major arm of the adaptive immune system, besides T cells, and could offer opportunities for new treatments against some kinds of cancers.

"Intratumoral B cells are an area of growing interest, because several studies have now shown that they are associated with a better prognosis and longer survival," says first author Andreas Wieland, PhD, an Instructor in Rafi Ahmed's lab at Emory Vaccine Center. "However, nobody really knows what those B cells are specific for."

Wieland, Ahmed and colleagues decided to concentrate on head and neck cancers that were positive for human papillomavirus (HPV), because the virus provided a defined set of tumor-associated antigens, facilitating the study of tumor-specific B cells across patients.

"Our findings open the door for harnessing this type of cancer-specific immunity in future immunotherapy applications," says Nabil Saba, MD, director of the head and neck medical oncology program at Winship. "This has implications not just for HPV-related squamous cell carcinomas of the head and neck, but for the broader field of immuno-oncology."

"This has been a wonderful collaborative effort," Patel adds. "We're grateful to the patients whose tumor samples contributed to this study, and I'm looking forward to where this information takes us."

Within HPV-positive tumors, researchers found an enrichment for B cells specific to HPV proteins, and a subset of these cells were actively secreting HPV-specific antibodies. In the tumors, they could see germinal center-like structures, resembling the regions within lymph nodes where B cells are "trained" during an immune response.

In germinal centers, B cells mutate their antibody genes (somatic hypermutation) and are subsequently selected for increased binding affinity for the antigen. The researchers observed that the antibody genes carried by HPV-specific intratumoral B cells displayed a high number of mutations.

In two previous studies of HPV+ head and neck cancer, systemic antibody responses against HPV proteins were associated with improved survival and reduced risk of recurrence. But Wieland says that it’s not clear yet what exact role HPV-specific intratumoral B cells play in the body's fight against the cancer.

"HPV-specific antibodies may not be having a direct anti-tumor effect," he says. "HPV proteins remain inside the cell, and thus should be shielded in healthy tumor cells from direct antibody engagement. But the anti-HPV antibodies could be helping the T cell response."

Wieland says that the role of antibodies against HPV proteins should be further evaluated and that HPV-specific antibodies could potentially be used as therapeutic treatment against HPV+ head and neck cancers, whose incidence has been rising in recent years. They could also be investigated for other HPV-associated tumor types.

"B cells and antibody-secreting cells are present in other cancers," he says. "The challenge with other types of tumors, especially non-virus-induced tumors, will be the identification of the antigens targeted by the B cells."