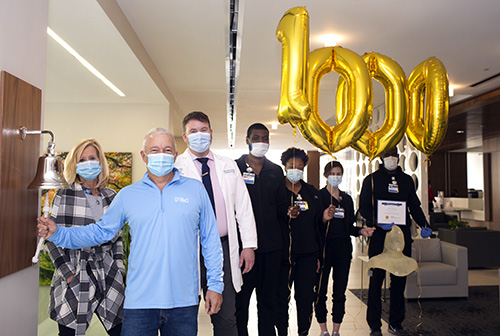 Emory Proton Therapy Center 1000th patient, Terry Kennedy rings the bell to mark the end of his treatment and celebrate the center's milestone.

The Emory Proton Therapy Center celebrates its second anniversary this month and has reached an important milestone: treating its 1,000th patient.

Since opening in 2018, the Emory Proton Therapy Center has been a tremendous addition to Winship Cancer Institute of Emory University's (Winship) and the Department of Radiation Oncology's advanced treatment options for patients with many types of cancer. Physicians at the center, the first in Georgia, treat patients with proton beam therapy, an advanced radiation oncology treatment option. Proton therapy often allows physicians to reduce the administration of radiation to healthy tissue in cancer patients, an approach that can reduce treatment side effects.

The center's innovative technology has attracted outstanding faculty whose clinical research provides patients access to several innovative treatment options. There are over 15 active clinical trials at the center that focus on proton therapy treatment for patients with brain, lung, esophageal, breast, liver, prostate, pediatric, or head, and neck cancers. Radiation oncology residents and students train at the center, preparing them for future careers treating patients with proton therapy.

Of the over 1,000 patients, 11% have come from out-of-state. To date, 54% of patients have self-referred or been referred by physicians outside of Emory. With the help of the Emory Proton Therapy Center's dedicated team of insurance specialists, 91% of patients requiring an insurance authorization for proton therapy have received approval. There have been 108 pediatric patients treated since the opening. Notably, half of the first 1,000 patients were treated in the last eight months, despite the ongoing pandemic.

"It is truly humbling to reflect that in this short time span we have had the opportunity to positively impact over a thousand lives through access to the best possible radiation treatment for their condition," says Mark McDonald, MD, medical director of the Emory Proton Therapy Center and associate professor in the Department of Radiation Oncology.

Terry Kennedy, one of those first 1,000 patients, was playing in a golf tournament when he felt extreme pain in his neck. After visiting a chiropractor and orthopedist he was referred to Winship spinal surgeon Daniel Refai, MD. After meeting with an oncologist for blood work, Kennedy was diagnosed with solitary plasmacytoma, a rare B cell malignancy often affecting bone structures. He was referred to McDonald for proton therapy to receive treatment that wouldn't cause added side effects.

"She was extremely personable as she worked with me and my insurance company to make sure that I was accepted to the center and everyone from Erika to my physicians to my nurse Janet made me feel like I was a part of one big family," says Kennedy.

Kennedy and his wife Sherri drove from their family farm in Madison, Ga. to the proton center every day for his treatment. The couple has two sons and recently celebrated a new addition to their family, their fourth grandchild.

When asked what he would tell someone who was beginning treatment at the center, Kennedy replied "You are definitely not a number when you go to the Emory Proton Therapy Center. They make you feel at home."

McDonald states: "As we celebrate the milestones of our 2nd anniversary and 1,000th patient treated, I am most proud of our outstanding team who have poured their heart and soul into starting and expanding the proton center around a mission to provide compassionate healing through advanced technology, innovation, and research-driven care."