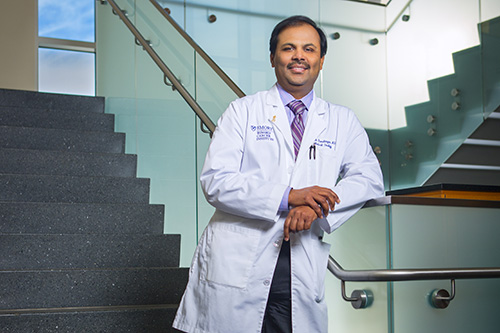 Suresh Ramalingam, MD will present the updated results from the CheckMate 227 trial that led to the FDA decision in an oral session at the ASCO20 Virtual Scientific Program.

The U.S. Food and Drug Administration (FDA) announced approval of a novel combination of immunotherapy drugs as a first-line treatment option for patients with metastatic non-small cell lung cancer, based on a trial held at Winship and other sites. Suresh Ramalingam, MD, deputy director of Winship Cancer Institute of Emory University, will present the updated results from the CheckMate 227 trial that led to the FDA decision in an oral session at the ASCO20 Virtual Scientific Program, the annual meeting of the American Society of Clinical Oncology (ASCO), to be held May 29-31, 2020.

As one of the trial's leaders, Ramalingam will present the analysis of CheckMate 227, with three-year follow up data on the combination therapy of nivolumab plus ipilimumab for patients with metastatic non-small cell lung cancer (NSCLC) whose tumors express PD-L1. The results show sustained improvements in overall survival and additional efficacy measures as a first-line treatment for patients with metastatic NSCLC.

The trial compared the effectiveness of using two checkpoint inhibitor therapies that target the PD-1 receptor and the CTLA-4 receptor to standard chemotherapy. Ramalingam, who was senior author on the paper published on this study in the New England Journal of Medicine, says this dual inhibition has potential for delivering long-lasting survival benefit for patients with NSCLC who remain in need of additional treatment options.

"The three-year outcomes from CheckMate 227 show evidence of sustained survival gains with nivolumab plus ipilimumab in the first-line treatment of non-small cell lung cancer; the data reaffirm the established scientific rationale that dual inhibition of PD-1 and CTLA-4 has the potential to deliver deep and durable responses for certain patients," says Ramalingam, who is assistant dean for cancer research in the Emory School of Medicine and the Roberto C. Goizueta Distinguished Chair for Cancer Research.

With a median follow-up time of more than three years (43.1 months), the combination treatment continued to show a survival benefit compared to chemotherapy among patients whose tumors had the required level of PD-L1 expression. Three-year overall survival rates in this population were 33% for nivolumab plus ipilimumab, compared to 22% for chemotherapy alone. The immunotherapy combination treatment also delayed disease progression or death among these patients. The safety profile of the nivolumab and ipilimumab combination was consistent with previously reported studies in NSCLC, and no new safety signals were observed.