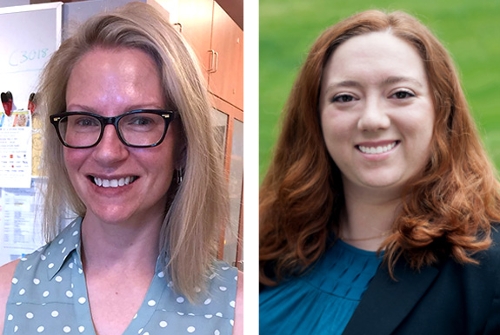 Adam Marcus' lab has developed innovative techniques for separating "leaders" and "followers," subpopulations of tumor cells that cooperate during the process of metastasis. The lab's new analysis of what molecular features distinguish leader from follower lung cancer cells focuses on filopodia.

The results are published in Science Advances.

The findings could help researchers develop treatments that prevent cancer from spreading, by understanding the rare cells within a tumor necessary for deadly metastasis. The durable epigenetic changes that distinguish leader cells and invasive behavior may appear in several types of cancer, says Marcus. He is associate director for basic research and shared resources at Winship and professor of hematology and medical oncology at Emory School of Medicine.

Marcus' previous research has shown how leader cells and their more common counterparts, follower cells, work together to create an invasive pack. The two types of tumor cells depend upon each other for mobility and survival, but have distinct patterns of gene activity and even different shapes.

In particular, leader cells display longer filopodia than follower cells. This is part of what the investigation by graduate student Emily Summerbell (who recently obtained her PhD), associate research scientist Janna Mouw, PhD and their colleagues revealed.

"Filopodia are like the fingers of the cell, and help the cell pull its way forward," Summerbell says.

Having longer filopodia is linked with a gene called MYO10, which encodes a component of the internal cellular skeleton stabilizing filopodia, Summerbell and Mouw found. MYO10 was the gene that was the most up-regulated in leader cells, compared with follower cells, and both long filopodia and invasive behavior depend on MYO10 activity.

"It was known that MYO10 was linked to invasion and metastasis, but this is the first evidence that it is playing this specific role in a rare subset of cells," Marcus says. "This could help us look for these rare cells in patient tumors to gauge how potentially invasive they are."

The MYO10 protein helps filopodia rearrange fibronectin molecules into fibrils, but it does not appear to interact with fibronectin directly.

"As the leader cell filopodia pull on the extracellular matrix, they change this matrix from a random mesh into long parallel tracks in front of the cell, paving a road for a group of cells," Summerbell says.

Summerbell and Mouw also studied other changes that distinguish leader cells, such as elevated expression of the Jagged1 gene. Jagged1 encodes a receptor for the Notch pathway, whose activity lies behind activation of MYO10. MYO10 and Jagged/Notch activation may be generalizable to patient samples and other types of cancer.