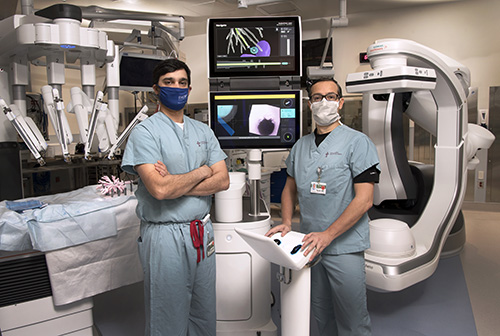 Finding and treating lung cancers early is critical to improving patient outcomes. Now, doctors at Emory Saint Joseph's Hospital will be the first in the state to use a new state-of-the-art robot to diagnose lung cancers earlier and less invasively.

With its ultra-thin and maneuverable catheter, the Ion robot, made by Intuitive, is capable of reaching deep into the peripheral areas of the lung, where the robot enables doctors to biopsy suspicious tissue.

"Early stages of lung cancer can be challenging to diagnose since tissue samples are needed from difficult-to-reach places deep within the lung," says Manu Sancheti, MD, assistant professor of surgery at Emory University School of Medicine, chief of thoracic surgery and medical director of perioperative services at Emory Saint Joseph's Hospital. "The new Ion robot will allow us to access those areas of the lung more easily and biopsy suspicious nodules with precision and in a minimally-invasive way."

In addition to diagnosing lung cancers earlier, Emory Saint Joseph's Hospital will be one of the first hospitals in the southeast to use the robot to get real-time information about whether the tissue is cancerous and potentially proceed immediately to surgical treatment.

"When used in Emory Saint Joseph's Hospital's state-of-the-art hybrid operating room alongside Intuitive's da Vinci surgical robots, the Ion will allow us to diagnose early-stage lung cancers and treat them all in the same surgical session," Sancheti says. "This really revolutionizes the treatment process, allowing us in some cases to shave weeks off the treatment regimen, which typically involves multiple appointments."

During the robotic-assisted bronchoscopy, a doctor uses a controller with a heads-up display to navigate the camera-equipped catheter along a pre-planned path through the lung airways. With its 3.5-milimeter size and ability to articulate 180 degrees in any direction, the Ion is capable of reaching all 18 segments of the lung. Once the targeted area is reached, a flexible needle is used to biopsy the suspect tissue.

"The advanced features of the Ion robotic navigation give us an unprecedented level of precision when performing bronchoscopies for lung nodule biopsy," says Alejandro Sardi, MD, assistant professor of medicine at Emory University School of Medicine and an interventional pulmonologist at Emory Saint Joseph's Hospital. "This is just the latest step in our efforts to diagnose earlier and provide better outcomes for patients at Emory Saint Joseph's Hospital."