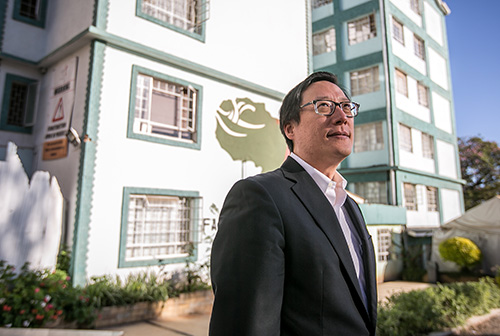 A new study published in JAMA Oncology by Winship Cancer Institute of Emory University's Michael H. Chung, MD, MPH, and colleagues, finds that loop electrosurgical procedure (LEEP) is more effective than cryotherapy in clearing high-risk human papillomavirus (hrHPV) in women living with HIV. Chung is a professor of infectious diseases at Emory University School of Medicine, and a professor of global health and epidemiology at Rollins School of Public Health.

The study drew upon data for 354 HIV-infected women recruited from the Coptic Hope Center for Infectious Diseases in Nairobi, Kenya—which Chung cofounded. It set out to determine which modality is more effective at clearing hrHPV, and whether persistent hrHPV is associated with recurrent cervical cancer.

Half the women were randomly assigned to receive cryotherapy and the other half to receive LEEP.

The women were followed every six months for two years with hrHPV cervical swab and Pap tests. Persistent hrHPV detection was associated with a substantially greater risk of recurrent cervical cancer even after controlling for immune status, HIV viral suppression, and type of intervention. Over the 24 months, significantly more women treated with LEEP cleared the hrHPV than those treated with cryotherapy. LEEP was also better at preventing recurrent cervical cancer.

"Our study showed that when treating pre-cancerous cervical lesions in HIV-infected women, LEEP should be the preferred option instead of cryotherapy," said Chung. "In addition, HPV testing for HIV-infected women is reasonable to do to determine whether the treatment has been successful and can be done as early as 6 months after the intervention."

HPV is the most common sexually transmitted infection. It is associated with cervical cancer in women and genital warts in both women and men. Women living with HIV who also have certain types of cancer-causing HPV are at higher risk of developing cervical cancer, one of the illnesses that define advanced untreated HIV disease, or AIDS.

Cervical cancer is the fourth most frequently diagnosed cancer among women worldwide, and the most common cause of cancer death among women in sub-Saharan Africa. Women living with HIV have a higher rate of hrHPV than the general population, and are more likely to have persistent hrHPV infection leading to cervical intraepithelial neoplasia (CIN), abnormal growth of cells on the surface of the cervix that can potentially lead to cervical cancer.

It's helpful to understand hrHPV and HIV coinfection to determine the usefulness of hrHPV testing to prevent cervical cancer among women living with HIV. The World Health Organization (WHO) and many national guidelines recommend testing for hrHPV as a primary cervical cancer screening tool in both high-income, middle- and low-income countries. Testing for hrHPV also is used to screen for recurrent disease after treatment for precancerous cervical lesions, and to help define the frequency and duration of follow-up.

Women in high-income countries with CIN grade 2 and higher are often treated with LEEP, which excises the lesions and surrounding tissue. In low- and middle-income countries, inexpensive and less technically complex cryotherapy is used to freeze the area around the lesion. Neither approach completely treats CIN or clears hrHPV infection, particularly for HIV-positive women. This is why it was important to compare LEEP and cryotherapy outcomes, and to determine whether one or the other is most effective at clearing cervical hrHPV infection, as well as whether persistent hrHPV is associated with recurrent CIN.

"Current clinical practice to treat pre-cancerous cervical lesions in LMIC's [low- and middle-income countries] largely rests on using cryotherapy," said Chung, "which is easier and less expensive to administer than LEEP. Clinical practice in LMIC should try to prioritize LEEP over cryotherapy when treating HIV-infected women to achieve the best clinical outcomes."

Grant support was provided by the President's Emergency Plan for AIDS Relief through the Centers for Disease Control and Prevention under cooperative agreements GH002036 and GH002001.