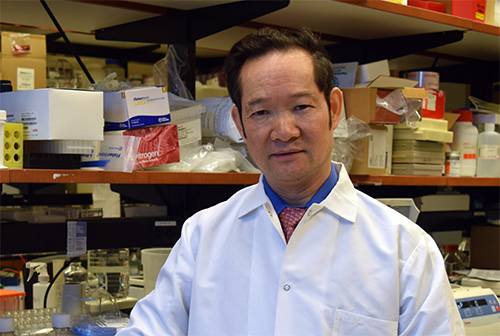 Xingming Deng, MD, PhD and colleagues are focusing a protein called Mcl-1, which cancer cells rely on to stave off cell death as well as to regulate how they repair damaged DNA.

They have already identified an inhibitor of Mcl-1 called MI-223, which Deng's previous research indicates could be combined with existing anticancer drugs. MI-223 sabotages cancer cells' ability to repair DNA and may be able to sensitize tumors against other drugs.

Researchers plan to test MI-223 in combination with the FDA-approved PARP inhibitor olaparib, as well as cancer immunotherapy agents, as well as monitoring possible resistance mechanisms. They also plan to examine whether a specific form of Mcl-1 may be a prognostic marker in patients with non-small cell lung cancer, by probing for that form of the protein in biopsy samples.

"By targeting Mcl-1, we expect to develop a new class of anti-cancer agents and combination strategies for lung cancer treatment," says Deng, who is professor and Chair in Cancer Biology in Department of Radiation Oncology at Emory University School of Medicine and director of the discovery theme in Winship's Discovery and Developmental Therapeutics Research Program.