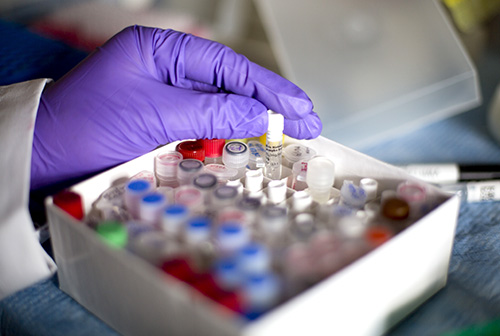 Winship researchers have been figuring out how to apply a promising anti-cancer treatment drug called venetoclax in a way that can benefit the most patients.

"Precision medicine" is an anti-cancer treatment strategy in which doctors use genetic or other tests to identify vulnerabilities in an individual's cancer subtype. Winship Cancer Institute researchers have been figuring out how to apply this strategy to multiple myeloma, with respect to one promising drug called venetoclax, in a way that can benefit the most patients.

Known commercially as Venclexta, venetoclax is already FDA-approved for some forms of leukemia and lymphoma. Researchers had observed that multiple myeloma cells with one type of chromosomal DNA rearrangement tend to be sensitive to venetoclax. About 20 percent of multiple myelomas carry this rearrangement, called t(11;14).

"One of our main goals is to identify a better biomarker to predict patient response to venetoclax," says Winship researcher Vikas Gupta, MD, PhD, lead author of a paper published in Blood earlier this year.

Gupta is working together with Winship hematologist Jonathan Kaufman, MD, and researcher Larry Boise, PhD, associate director for education and training, to translate insights about myeloma cells into advances for patient care.

In a recent clinical trial led by Kaufman, a sizable fraction of people whose myelomas carried this DNA rearrangement responded well to venetoclax, when their cancers were already refractory to other drugs. Another study that did not separate out myelomas with t(11;14) extended progression-free survival by almost a year. However, venetoclax also was associated with increased mortality from infections, which led the FDA in 2019 to put the second study on hold temporarily. Other ongoing studies of venetoclax with multiple myeloma were affected. It highlights the need to predict which patients would benefit from venetoclax – and which would not be likely to, for whom the drug may pose more risk.

In their paper, Winship investigators discovered that a set of cell markers predicted sensitivity to venetoclax better than t(11;14). These were markers for B cells, a type of white blood cell related to both multiple myeloma and some of the other forms of leukemia and lymphoma venetoclax is used to treat.

Gupta says that it was already possible to extract myeloma cells from patients and test whether they are sensitive to venetoclax directly in the laboratory. But this isn’t practical for most clinics in cancer centers elsewhere.

"In contrast, the B cell phenotype can easily be assessed by flow cytometry, a technique that is routinely performed in clinical labs," Gupta says. "So we are attempting to refine and validate our panel of flow cytometry markers, so that it can be used to easily and accurately predict which patients are sensitive to venetoclax."

Multiple myelomas come from plasma cells, whose job as part of the immune system is to churn out antibodies. B cells represent the developmental step before the cells are tapped to become antibody factories. They appear to be more dependent on a "life preserver" protein called Bcl-2, which venetoclax targets. So the myeloma cells that are sensitive to venetoclax are – in an aberrant way – reverting back to their origins as B cells.

The markers also tell scientists something about how to combine venetoclax with other drugs.

"We hope to not only better predict who will be sensitive to venetoclax, but also identify mechanisms of resistance that might be targets for combination therapy to increase the number of patients likely to benefit," Gupta says.

Together with Kaufman, Gupta is in the process of developing an investigator-initiated clinical trial, which has received preliminary FDA approval. Researchers will be studying the combination of tocilizumab, an IL-6 receptor blocking antibody used in rheumatoid arthritis, with venetoclax in multiple myeloma patients. This study builds upon work from Gupta and Boise demonstrating that the inflammatory molecule IL-6 induces resistance to venetoclax.