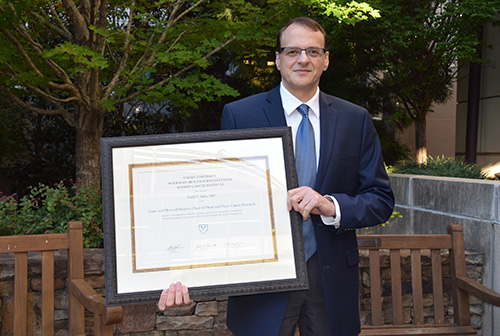 Nabil F. Saba, MD, is the inaugural recipient of the Lynne and Howard Halpern Chair in Head and Neck Cancer Research.

Nabil F. Saba, MD, professor of hematology and medical oncology at Emory University School of Medicine, was honored as the inaugural recipient of the Lynne and Howard Halpern Chair in Head and Neck Cancer Research, in a special virtual ceremony on September 21, 2021.

"Endowed chairs such as this one," said Jonathan S. Lewin, MD, Emory University's executive vice president for health affairs, executive director of the Woodruff Health Sciences Center, and CEO and chairman of the board for Emory Healthcare, "are critically important to the success of an academic health center. They allow us to accelerate the pace of breakthrough discoveries that lead to better care and cures, and they offer powerful opportunities to recruit and retain stellar faculty."

Speaking of the Halperns themselves, Lewin added, "The Halpern family understands the profound importance of endowed chairs, especially in a field as vitally important as head and neck cancer. They've been long, great friends to Emory and to our research, education, and patient care missions, and we are very grateful for their generous and ongoing support of both the university and Winship Cancer Institute."

Vikas P. Sukhatme, MD, ScD, the Robert W. Woodruff professor of medicine and dean of the Emory School of Medicine, presented the new endowed chair to Saba. "I'd like to recognize that the Lynne and Howard Halpern Chair in Head and Neck Cancer Research has been awarded to Dr. Saba, whose work is extraordinary in head and neck and esophageal cancer and a number of other cancer types as well. His focus has been on the clinical development of novel agents and other therapeutic modalities."

Suresh S. Ramalingam, MD, the Roberto C. Goizueta Distinguished Chair for Cancer Research and executive director of Winship Cancer Institute spoke about the importance of endowed faculty positions like the new Halpern Chair. "This gift will be highly instrumental in elevating the head and neck program at Winship to conduct innovative research and improve the lives of patients; Dr. Nabil Saba is a superbly qualified to be the recipient of this honor, based on his career accomplishments and impact to the field."

"By endowing this chair," said Lynne Halpern, speaking for herself and her husband Howard, a former Winship patient, "we hope the research that will come from it will be of benefit to those who have battled this dreaded disease."

Howard Halpern said that after seeking a second opinion about his cancer in Houston, "Winship was where we were going to make our stand and fight. And fight we did." He added, "I was awestruck by the care and concern of everyone at Winship. Chemo and radiation treatments are no fun, but everyone at Winship was compassionate and caring, and made the ordeal so much more bearable."

Halpern said his successful recovery allowed him to resume his career and eventually sell his business. "It was then time for me to give back," he said. "With a recommendation of Winship leaders, and in honor of all those who supported us, we have established the Lynne and Howard Halpern Chair in Head and Neck Cancer Research."

Fadlo Khuri, MD, president of the American University in Beirut and formerly executive associate dean of research and chair of the Department of Hematology and Medical Oncology at Emory University's School of Medicine, in a recorded video message pre-recorded at the university, thanked the Halperns for their generosity in endowing the chair.

Khuri noted that Saba’s achievements before being named the first holder of the new Halpern chair included chairing the National Cancer Institute’s expert panel on head and neck oncology, editorial boards of journals, and in the last several years a "remarkably productive career." On top of that, said Khuri, "Nabil is an incredibly compassionate and good physician. He cares about every patient. He cares deeply about everyone he comes in contact with."

Sagar Lonial, MD, chair of the Department of Hematology and Medical Oncology, Winship's chief medical officer and the Anne and Bernard Gray Family Chair in Cancer, noted that Saba "in a very short period of time has gone from a practicer of head and neck medical oncology to a global leader in head and neck medical oncology." He added, "The future of treatments in head and neck cancer includes things like immunotherapy, and he has been a leader in pushing those things forward, not just on the research side, but also on the clinical side."

For his part, Saba thanked his family, teachers, friends, and colleagues. To the Halperns, he said, "My gratefulness and appreciation for your generous support through this chair is beyond my ability to describe in words. It is because of people like you that real difference can be made for our cancer patients."