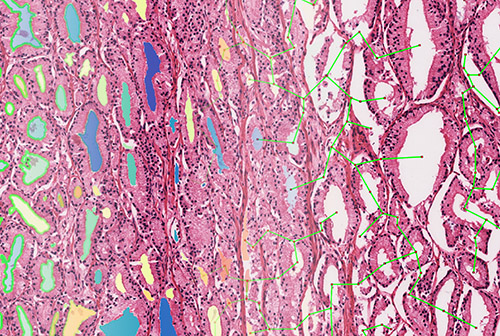 Illustration of how the computer detects objects in tissue and quantifies their shape and spatial relationship.

Approximately one in 8 men will be diagnosed with prostate cancer during their lifetime and one in 41 will die from the disease. The challenge for oncologists is figuring out which subset of men will benefit from adjuvant therapy, which is additional cancer treatment given after the primary treatment to lower the risk that the cancer will come back.

A team of researchers at Winship Cancer Institute of Emory University received a $3.2 million, five-year grant from the National Cancer Institute (NIH 1 R01 CA268287-01A1) to develop artificial intelligence tools to identify which patients with prostate cancer should receive adjuvant therapies and which ones are candidates for active surveillance.

"More than 34,000 men a year end up having high-risk prostate cancer with metastasis and die, even after curative therapy such as prostatectomy, surgery or radiation therapy," says the study’s principal investigator Anant Madabhushi, PhD, professor in the Wallace H. Coulter Department of Biomedical Engineering at Emory University School of Medicine and Georgia Institute of Technology College of Engineering, and member of the Cancer Immunology research program at Winship Cancer Institute of Emory University. "We are developing AI tools that work with biopsy images or surgical specimens of the prostate to identify who will likely have metastasis and benefit from chemotherapy following definitive therapy – radiation and/or surgery."

Madabhushi's team is collaborating with researchers from the University of Pennsylvania and Cleveland Clinic on the research to create a prognostic and predictive digital tissue image assay for prostate cancer. It will not only predict risk of metastasis but also critically identify which men will receive added benefit from chemotherapy post-definitive treatment. The algorithms will analyze morphologic information – including the patterns, shapes and spatial architecture of individual glands and cells – to provide easily interpretable data.

"Grading of prostate cancer is one of the most important pieces of information used in deciding patient treatment and prognosis. But the current system has wide observer variability, leading to inconsistent treatment plans and outcomes," says Priti Lal, MD, co-principal investigator on the project and associate professor of pathology and laboratory medicine at the Hospital of the University of Pennsylvania. "The application of AI to analyze morphologic information offers a powerful nondestructive approach to discerning large amounts of biologically important tumor features. This information has allowed us to develop a grading system that is consistent, accurate and clinically significant."

The AI solution offers a low-cost approach – approximately $3 – to non-invasive precision medicine compared to existing tests, such as the Decipher prostate biopsy. Decipher, which costs several thousand dollars, provides a genomic score to predict risk of metastasis. In a paper published last year in the journal npj Precision Oncology, Madabhushi and his colleagues demonstrated that routine images from biopsies and prostate pathology images, coupled with the Gleason score and prostate-specific antigen (PSA) test, outperform the Decipher test in predicting cancer recurrence.

"As a male, if you live long enough, you are at high risk of getting prostate cancer," says Madabhushi. "Developing these tools for risk stratification – being able to identify the really aggressive ones – is critical."