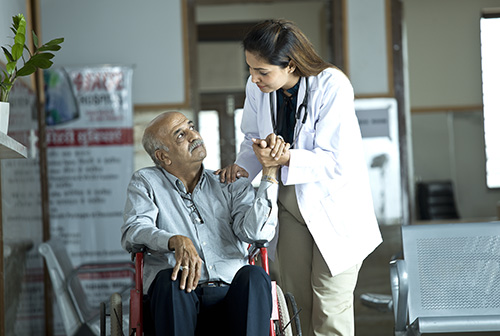 A multi-institutional collaboration between Winship and others harnesses the power of artificial intelligence to measure patient risk and determine the benefit of therapy for patients in Indian populations.

More than 1.7 million people in India have cancer, with some of the most common types including breast and oral cavity cancers. A collaboration between Winship Cancer Institute of Emory University, University Hospitals in Cleveland and the Tata Memorial Centre in Mumbai harnesses the power of artificial intelligence, in combination with routinely acquired biopsy pathology images, to measure patient risk and determine the benefit of therapy.

"Our focus is on developing better diagnostic tools for low- and middle-income countries," says Anant Madabhushi, PhD, professor in the Wallace H. Coulter Department of Biomedical Engineering at Emory University School of Medicine and Georgia Institute of Technology College of Engineering, and member of the Cancer Immunology research program at Winship Cancer Institute of Emory University. "There is a huge incidence of cancer in India, primarily due to its larger population – 1.4 billion people – and not due to a higher risk. But there is an associated limitation of available resources to deliver the appropriate therapy for every individual. Therefore, we want to be confident that resources are optimally deployed to patients who will benefit from chemotherapy and radiation therapy."

"Developing tools that will cost pennies on the dollar compared to expensive molecular diagnostic tests, such as the Oncotype DX® test for breast cancer, is critical in countries like India," says Madabhushi. "Low-cost tools have the potential to become a game changer because they can be deployed at scale."

With limited medical equipment and resources available in India, health care decisions often hinge not only on sparing patients the unnecessary toxicity of radiation, chemotherapy and other treatments, but also on ensuring that resources are directed toward those patients who will most benefit from the treatments. The AI tools developed by Madabhushi's team will enable such decision-making.

"Artificial intelligence in diagnostics in pathology has a huge potential to be applied in oncology care across the length and breadth of India, networked and interlinked through the National Cancer Grid," says Vani Parmar, MBBS, MS, DNB, a surgical oncologist at Tata Memorial Centre and co-principal investigator on the study. "With AI, now prognostication has also been made feasible at a very low cost and without compromising or destroying patient tissue samples, which can be preserved for molecular based analysis."

The research team is tailoring its AI solution to common cancers in India. The aggressive triple negative breast cancer has a 25-30% prevalence rate in India, which is higher than in western countries. Similarly, India has the second highest number of oral cancer cases globally, and prostate cancer is also on the rise.

The Winship Cancer Institute's partnership with Tata Memorial Centre aligns with Emory University's "One Emory" strategic framework, which aims to mobilize change for the world.