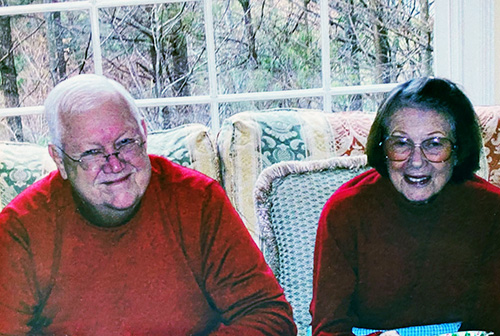 When Pat Reynolds was diagnosed with a soft tissue sarcoma in 2004, she and her family had never heard of the rare cancer that accounts for just 1% of all adult cancer diagnoses in the United States.

Now, 17 years after Pat succumbed to this rare disease, her family is working to give others access to world-class sarcoma expertise and research by creating the Patricia R. Reynolds Professorship in Sarcoma at Winship Cancer Institute of Emory University.

Kenneth Cardona, MD, who is a professor of surgery within the Emory Division of Surgical Oncology and the Sarcoma Disease Team lead for Winship, has been named the inaugural holder of the Reynolds Professorship.

"I'll never forget the day my dad called me into his office and shared that my mother had cancer," says Rick Reynolds, president of Peach State Truck Centers and member of the Winship Advisory Board. "We struggled with, "What is sarcoma?"

His father, Tom Reynolds, carried a piece of paper in his wallet with his wife's diagnosis written down to help him remember the name of this unusual and uncommon disease.

"My father was energized by the passion and challenged by the vision that Winship leadership had as to what could happen here at Emory with the proper staffing and resources directed toward a cure," Rick Reynolds says. "Sarcoma was my dad's focus. This led to his participation in the Winship Advisory Board, to his being among the first company presidents in Georgia to personally champion the Winship 5K as a philanthropic priority, and to his esblishment of the endowment in my mother's name to create not only awareness of sarcoma but also initiate a higher level of research and staffing focused on the disease."

Cardona is highly regarded in the sarcoma field, both in Georgia and globally. He leads national research efforts in the study of sarcoma as the chair of the National Cancer Institute's ECOG-ACRIN Cancer Research Group and is the principal investigator of the United States Sarcoma Collaborative. Internationally, he is an active member of the multi-institutional TransAtlantic Retroperitoneal Sarcoma Working Group, a collaborative that involves sarcoma experts from over 40 centers across the world, and the Desmoid Working Group, which consists of more than 50 international sarcoma experts, patients and patient advocates. Additionally, he is on the editorial board of the soft tissue sarcoma section of Annals of Surgical Oncology, Journal of Surgical Oncology and Oncology.

"The more we learn about sarcoma the more there is to learn," Staley says. "This underscores why physicians like Ken, who are focusing their medical careers on sarcoma, and families like the Reynolds, who focus their philanthropy in this area, could not be more vital."

"I am deeply honored to be the inaugural holder of the Patricia R. Reynolds Professorship and am grateful to the Reynolds family for championing the cause of sarcoma," Cardona says. "My focus and hope every day is to make a difference for those diagnosed with this rare disease."

The Reynolds Professorship celebrates a beloved wife and mother and active community volunteer. Born in Bristol Somerset, England, Pat Reynolds lost both of her parents at a young age and lived with her grandparents. At age 18, she immigrated to the United States to live with her older sister in Wisconsin. Soon after becoming an American citizen, Pat met Tom, who would become the love of her life. Together they started what is today known as Peach State Truck Centers. When Pat died, the couple had been married for 50 years.

"My mother was someone who had a huge, huge heart for other people; she consistently wanted to lift people up," Ann Reynolds Crouse says. "She always focused on what she could do to serve others, and she loved bringing joy to everyone."

Ann and Rick, who serve on the Winship Advisory Board (following in the footsteps of their father, who passed away in 2016, and brother Tim, who died in 2017), have supported Winship in many ways over the years. Peach State Truck Centers has been a lead corporate sponsor of the Winship 5K for 11 years and annually fields one of the event's largest corporate teams. Ann has also supported research through the Glenn Family Breast Center following her own cancer diagnosis several years ago.

Yet for all their Winship involvement, the siblings have been steadfast in carrying forward their father’s efforts to shine the spotlight on sarcoma.

"Supporting Winship's sarcoma efforts has given us such great joy, to quote my dad," says Ann. "I am grateful there is more knowledge and treatment options available now than when my mother was diagnosed."

"Like others at Winship, I have been deeply touched by the Reynolds family's longstanding and compassionate partnership in an area of cancer that, because it is so rare, has few philanthropic champions," Ramalingam says.

In reflecting on the entirety of his family's experience with cancer, Rick says, "All you have to do is talk to patients who have been at Winship. Talk to the physicians, the researchers, the clinicians and the caregivers. When you see that passion, that drive to find a cure, you want to be a part of it."

Ann says while her mother wouldn’t want to be in the spotlight, "I definitely can see my mother cheering on the effort to make a difference for others. And if she were still with us, she also would be a very hands-on volunteer… playing the Winship piano, serving cookies to patients and staff in the lobby, etc. She genuinely lived a life centered on doing any good you can."