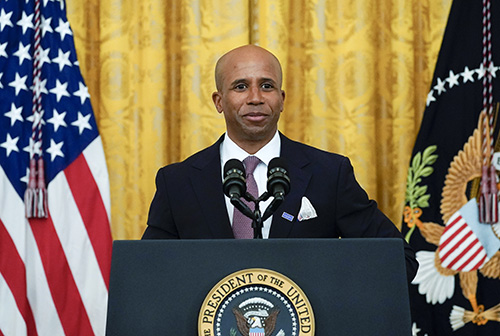 Edjah Nduom's parents arrived in the United States from Ghana decades ago with close to nothing. On Wednesday, Nduom stood in the White House to help President Joe Biden unveil a national campaign to end cancer as we know it.

Nduom, a neurosurgeon-scientist at Emory University, was tapped to introduce Biden at a White House ceremony to relaunch the Cancer Moonshot initiative that began five years ago under President Barack Obama's administration. The announcement highlighted the initiative's new goals to reduce the death rate from cancer by at least 50 percent over the next 25 years and improve the experience of people and their families living with and surviving cancer.

Calling Biden the nation's "patient advocate in chief," Nduom said the rapid pace of scientific discovery makes this "the most exciting moment in the history of our field."

"Knowing that there is a president who is throwing the full weight of the presidency behind this effort means that even between big announcements like this one, all levers of government are being pulled to create a brighter future for cancer patients," he said.

For Biden, cancer is deeply personal; he lost his adult son, Beau, to brain cancer in 2015.

"We can do this, I promise you," Biden said Wednesday. "For all those we've lost; for all those we miss. We can end cancer as we know it. This is a White House presidential priority, period."

Nduom is a neurosurgical oncologist at Winship Cancer Institute of Emory University, an Emory Brain Health Center neurosurgeon and associate professor in the Department of Neurosurgery at Emory University School of Medicine, where he completed his residency. His research focuses on ways to harness the power of the immune system to fight brain tumors.

He is a member of the board of directors of the National Brain Tumor Society and a co-founder and diaspora representative of the Society for Neuro-Oncology Sub-Saharan Africa.

Referencing his own roots as an African American, Nduom said that there was a time when he would not have been permitted to do the work he is now doing.

"We have a ways to go before harnessing all of the diverse talents of our country," he said. "But the progress that we have made means that we are constantly bringing new ideas to this challenge."

Nduom's path to becoming a neurosurgeon and the role he is playing in training the next generation of brain surgeons was recently featured on a PBS episode of Your Fantastic Mind, a show produced by Georgia Public Broadcasting in partnership with Emory.