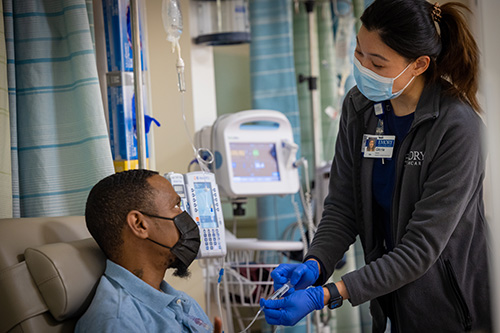 Winship is ranked in the top 50 in the United States and number one in Georgia and metro Atlanta for cancer care, according to U.S. News & World Report.

Winship Cancer Institute of Emory University (Winship) ranks in the top 50 in the United States, and No. 1 in Georgia and metro Atlanta for cancer care, according to U.S. News & World Report.

The magazine's annual list, released today, ranks cancer care at Emory University Hospital through Winship the 43rd best in the country. Emory University Hospital is the only hospital in the state to be named in the top 50 for cancer care in the country in the magazine's annual survey of the nation's best hospitals. Additionally, Emory Saint Joseph's Hospital was rated "high performing" in cancer.

"Being nationally ranked as a top center for cancer care is a testament to our commitment to patients at Winship," says Suresh S. Ramalingam, MD, Winship's executive director and Roberto C. Goizueta Chair for Cancer Research in Emory University School of Medicine. "As Georgia's only NCI-designated Comprehensive Cancer Center, we are fully dedicated to delivering top-notch cancer care, discovering cures for cancer and inspiring hope for all."

"We are pleased that Winship once again has been recognized as one of the country's best," says Sagar Lonial, MD, FACP, Winship's chief medical officer and professor and chair of the Department of Hematology and Medical Oncology at Emory University School of Medicine. "This rating is a mark of how our physicians and nurses, researchers and others on our team, who also rank among the best in their fields, place patients at the center of all we do."

U.S. News & World Report began publishing hospital rankings in 1990, as "America's Best Hospitals," to identify medical centers in various specialties that were best suited for patients whose illnesses pose unusual challenges because of underlying conditions, procedure difficulty, advanced age or other medical issues that add risk. Hospitals are assessed in 15 specialty areas for the rankings. In 12 of the 15 specialties, ranking is determined by an extensive data-driven analysis combining performance measures in three primary dimensions of health care: structure, process and outcomes. In the three other specialties, ranking relies solely on expert opinion. Nearly 5,000 hospitals are evaluated each year.

U.S. News & World Report first published Best Regional Hospitals in 2011. Within a state or major metropolitan area, regional hospital rank is determined by a hospital's performance in the national adult specialty rankings analysis and by its scores across 20 procedure and condition areas evaluated.