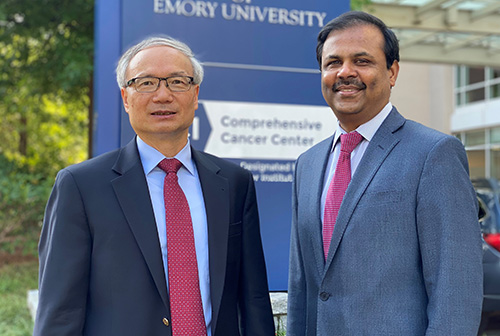 Winship Cancer Institute of Emory University has been awarded a P01 program project grant from the National Cancer Institute (NCI) to support research aimed at improving the effectiveness of immunotherapy for lung cancer in patients with a mutation of the LKB1 gene, a group for whom the present immunotherapy options do not provide robust benefit. The award will provide nearly $11 million dollars over 5 years to a team of Winship researchers led by Haian Fu, PhD, and Suresh Ramalingam, MD.

Approximately 250,000 new cases of lung cancer are diagnosed each year in the United States. More than 60% of these patients present with advanced stage disease, rendering them unable to benefit from curative treatment approaches, such as surgery, stereotactic radiosurgery and radiation therapy. Because advanced stage disease is more difficult to treat, the five-year survival rate is only about 15% in the US, and even less worldwide.

The most common type of lung cancer is non-small cell lung cancer (NSCLC), which accounts for about 85% of cases, and half of NSCLC cases are lung adenocarcinoma (LUAD). Despite a decline in lung cancer incidence overall, the incidence of LUAD has been on the rise for the past few decades, posing an increased therapeutic challenge and urgent medical needs.

In approximately 20% of patients with LUAD, the LKB1 gene is mutated (a mutation is a change in the DNA sequence of genes that causes cancer cells to grow and spread). While it is unclear what causes the mutation, it has been linked with lack of response to immunotherapy.

"The P01 grant will help to understand the reasons behind resistance to immunotherapy in patients with LKB1 mutation and seek to develop novel treatment approaches to improve efficacy," says the program project's principal investigator, Haian Fu, leader of Winship's Discovery and Developmental Therapeutics Program, the Winship Partner in Research Endowed Chair and professor and chair of the Department of Pharmacology and Chemical Biology at the Emory University School of Medicine. "Specifically, we will examine the intricate interplay between LKB1-mutant status and cancer metabolism, immunity and invasion to gain mechanistic insights needed to accelerate conceptual advances."

Fu and a team of Winship researchers will lead three integrated projects aimed at first understanding the role of LKB1 mutations and LUAD's resistance to immune checkpoint inhibitors and then translating these insights into a clinical trial testing new anti-cancer therapeutic strategies to overcome immunotherapy resistance.

"Despite the success of immunotherapy, its long-term benefits are limited to only 20% of patients with lung cancer; so extending the benefits to broader patient populations is a goal for our researchers," says principal investigator of the project and Winship's executive director, Suresh Ramalingam, who also is the Roberto C. Goizueta Distinguished Chair for Cancer Research and a professor of hematology and medical oncology at the Emory University School of Medicine. "Improving the effectiveness of immunotherapy for patients with LKB1 mutation will have a major impact on lung cancer outcomes."