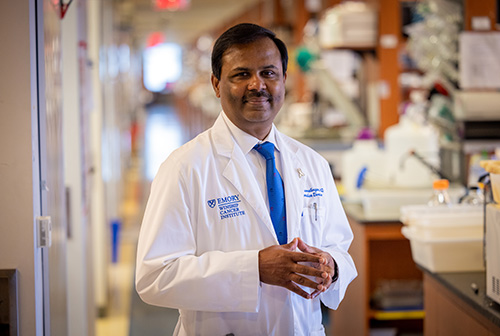 Suresh Ramalingam, MD, is the principal investigator on a study offering new insight into what causes resistance to the non-small cell lung cancer medication osimertinib that may prove valuable in developing more effective therapies.

A study led by Winship Cancer Institute of Emory University offers new insight into what causes resistance to the non-small cell lung cancer (NSCLC) medication osimertinib that may prove valuable in developing more effective NSCLC therapies. Study results were reported August 8 at the International Association for the Study of Lung Cancer (IASLC) 2022 World Conference on Lung Cancer in Vienna, Austria.

EGFR C797X mutations happen from damage to the part of a cell's DNA carrying the "recipe" for EGFR (epidermal growth factor receptor) proteins. These proteins are involved in cells' division and survival. Sometimes mutations in the EGFR gene cause the proteins to be produced in higher than normal amounts in certain cancers, such as non-small cell lung cancer.

Osimertinib, sold under the brand name Tagrisso, is a medication used to treat non-small-cell lung carcinomas with EGFR mutations. It is a type of third-generation targeted therapy called tyrosine kinase inhibitor. "Although it is highly effective," says Ramalingam, "resistance invariably occurs in all patients."

When someone develops mutations, and resistance to osimertinib, most will have to change their drug therapy. "This involves switching to chemotherapy or enrolling in a clinical trial based on the specific resistance mechanism," says Ramalingam.

The study analyzed de-identified clinical and genomic data of more than 2,000 people who had an EGFR mutation and were being treated with osimertinib, drawn from the GuardantINFORM real-world evidence platform, which includes more than 65,000 adults with NSCLC. The study incorporated DNA results up to five years after patients initiated osimertinib therapy.

"We have made remarkable progress in improving outcomes for lung cancer patients," says Ramalingam. "With the advent of targeted therapies, patients are living longer and better, if their tumor bears a targetable driver mutation." He adds, "The next challenge is to understand mechanisms of resistance to targeted therapies and develop novel treatment approaches to overcome resistance."

Ramalingam says the study's results are "highly important" in highlighting the need to develop specific EGFR C797X inhibitors. "The analysis," he says, "characterizes the increased frequency of EGFR C79X mutations as patients are treated with first-line osimertinib for longer durations, reinforcing the need for next-generation EGFR inhibitors to address C797X-driven resistance."

He notes that in fact a fourth generation of EGFR inhibitors – with activity against C797X – are just entering the clinic. "These agents have an excellent pre-clinical profile," he says, adding, "A phase 1 trial of a fourth generation tyrosine kinase inhibitor will be opening soon at Winship."